How many people around the world must have taken to writing to escape the dreary existence many of us now call “life”? My primary issue is the thing I have chosen to write about is temporarily no longer an option. Dining out is not possible.

Lately, I haven’t had much of a chance to write anyway, so at least I’m behind and I can think of some experiences and put fingers to keyboard. Only a couple of weeks ago it was still possible to go out and practice social distancing at restaurants and cafes. Looking back I realise we all had a lot to learn.

Towards the beginning of the closures, Catherine and I had a difficult decision to make. Already a dinner on our anniversary as part of the Food and Wine Festival had been cancelled. We made another booking and in the lead up were excited about the forthcoming experience, but hesitant because the initial difficulties whilst booking had already put us off a little.

With about four days to go we were getting nervous with rumours of shutdowns, and every second day there was a new measure being announced by Federal and State Governments. After one last try to contact the restaurant (this time by email) we got a completely unhelpful response that they were open for our booking. They hadn’t answered our questions about the numbers of other guests coming for a weekday lunch, or social distancing practices; and they hadn’t offered anything else to comfort us that they were on top of the changes.

We had to cancel. We knew in our hearts it was the right decision, but it would also be the first anniversary we hadn’t been out for lunch or dinner. When we replied to the restaurant they told us that they hadn’t properly read our email and that they would have responded differently if they had. With the changing dynamic we don’t blame them for being busy just trying to survive, but it does go to show that we can live in our own bubble. A week later and there were thousands of people on Bondi Beach who also hadn’t got the memo.

The week before I must admit I was going about life carefully, but largely unhindered. I sat in cafes with Catherine and Sydney, and talked about how long we had left before shutdowns, which appeared inevitable. Everyone else was talking about the same things. When the Grand Prix got cancelled and I heard the experts talking about responsibility for others, especially older Australians, it started to hit home, and I started to be pro-active about cancelling catch ups, but even the week after I saw people that I didn’t need to see, and went to places I didn’t need to go.

It is not like I feel terribly guilty about doing so, but it is instinctive for me to follow rules. I am a chartered accountant after all! The blurriness of the rules confused my instinct and so I operated with caution but also within the broad-based boundaries. Take the blurriness out of the rules and I will adapt. 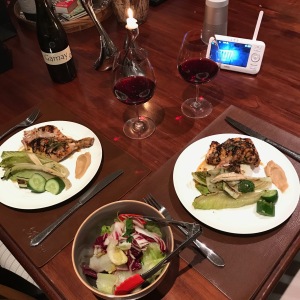 The first adaption came for our anniversary. Taking away from Vaporetto was an eye-opening experience. Even the most well-adjusted Uber Eats aficionado wouldn’t have imagined the options that would become available literally overnight. All of a sudden we are eating restaurant quality roasted chicken, radicchio salad, and tiramisu. The tiramisu is not your usual. It comes with a scoop of coffee gelato, and bits of honeycomb, all nicely contained so you can have a go at plating yourself in a quasi-restaurant fashion. 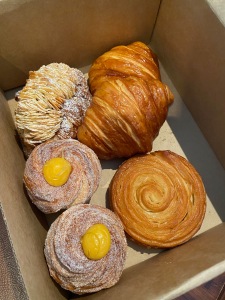 A week later we have had Cherry Tree pizzas for Friday lunch, and a very fancy pork belly, smashed potatoes, and remoulade from Matilda 159 (on Domain) for Saturday night dinner, and at the same place I’m picking up a bottle of 2014 Voyager Cabernet Sauvignon for half its current value! Lately, we’ve had Pillar Of Salt granola, and their slow cooked brisket, for lunch; and Lune are delivering croissants, cruffins, and kouign-amanns on a Sunday morning! This was never previously possible, especially at the prices being asked, which are more than reasonable. 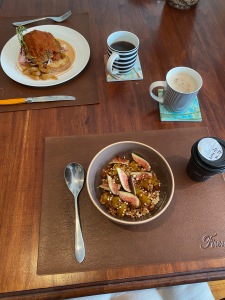 I realise a lot of Australians and people around the world are really suffering with their health and the health of their family, or struggling with unemployment and poverty, so I am not trivialising this health and economic crisis, and I feel very sad for the world right now. I enjoy eating, but when I’ve finished my meal I still feel a bit empty because a few weeks ago this meal could have been a celebration of life, and I could have been helping keep a lot more people employed than just a skeleton staff. I also do not want to turn a blind eye to how bad this is around the world. Most of us who haven’t been really sick, or to war, or through natural devastation, just simply cannot understand the pain that is reverberating around the globe right now. So many somber funerals with tiny amounts of mourners (or none at all), so much dismay and confusion, and so much uncertainty.

I do want to help though, and while I’m still employed (not a given to continue), I want to try to support the places that have made me happy over the years. As one person I’ve been served by at Pillar Of Salt tens of times said when I finally asked her name, “It’s not all business now with our customers.” No, this crisis has become very personal, and I think we are all learning more about ourselves. I know I am.

Check out my blog (link in instagram profile) for my thoughts on dining post COVID-19 #blksfoodblog bleekong.wordpress.com
We’ve missed Tipo 00 so their drive up option was eagerly anticipated and lived up to lofty expectations! The casarecce is beautiful and the tipomisu was different (to allow for travel) but still decadent and rich just like dessert should be! #blksfoodblog #tipo00 #tipo00melb #italian #takeaway #driveupoption #casarecce #tipomisu #stayathome #coviddining